The City and County of Denver Checkbook is open to the public, minus some confidential transactions and payment information. 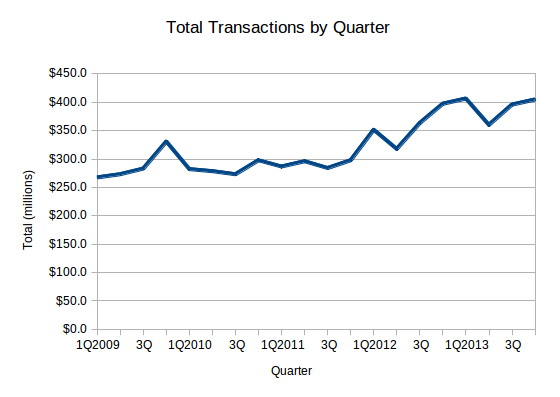 Transactions can also be summed by the day of the week that they occurred: 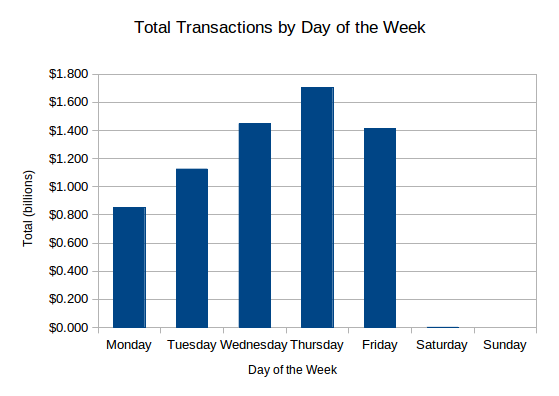 While the majority of the transactions are under $1,000, the checkbook also includes payments for general operations and contractual services. Some of the largest include:

Since the transaction amounts vary across several orders of magnitude, this data should abide to Benford’s law. If we take the first digit of each amount, we should find that the digit 1 occurs much more frequently than 9. Performing this count on the checkbook:

Expressed as a percentage of the total, along with the expected percentages:

These observed counts are completely within the range of the expected percentages and the checkbook is a great real life example of Benford’s law.

With a copy of the checkbook.csv you can produce these results yourself. The following schema was used to load the checkbook into a PostGres database:

The only change made to the data was the removal of a double quote in the Project Description "'Maintenance" RFID/Tech (temp)" that exists on multiple lines.

The PostGres COPY command was then used to quickly load the data:

Since the checkbook includes negative numbers, the sum was calculated using an absolute value:

The largest transactions were found with:

The transactions by quarter:

And by day of the week:

To count the leading digits: